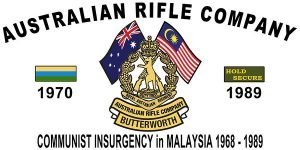 On Anzac Day RCB was represented publicly at two separate events: in Canberra at the Australian War Memorial in the Banner March and in Melbourne at the MCG in the Veterans’ Motorcade.

The importance of this event was the inaugural use of the RCB Banner and the associated commentary which raised our presence to a national audience, particularly the Government.

Ray Fulcher our RCB Review Group Chairman was in his capacity as the National Secretary of the Malaya and Borneo Association represented that Association. Although the submitted brief to the commentary team included reference to RCB it was not spoken. Nevertheless, Ray wore his RCB cap for all to see. Our thanks to Ray for his efforts to highlight our existence.