ON the night of December 7-8 1941, Japanese forces began invading Malaya, hours before the attack on US territory Pearl Harbour, 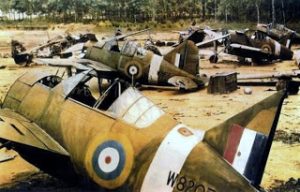 Australia’s first casualties on December 8 were the crews of two 1Sqn RAAF Hudson bombers from six aircraft dispatched to bomb Japan’s invasion fleet.
When Japanese aircraft attacked Butterworth, some RAAF Buffaloes were in the air and tried to intercept, but they were an inadequate match for the speedy Japanese fighters.
The ADF has maintained a long relationship with Butterworth, through the first Malayan Emergency 1950-1960, Confrontation, Vietnam and the second Malaysian Emergency (Counter Insurgency War 1969-1989) to the present day.
From 1958 to 1988 the airfield was an Australian military asset, known formally as RAAF Butterworth.
From 1970 an Australian Army infantry company has been deployed to Butterworth, though successive Australian governments have employed various subterfuges to camouflage their real role.
Although the deployment was officially described as training with Malaysian forces, its actual, formally denied role was to be a ready reaction force to defend, if required, the RAAF assets including Mirage fighters based there.
There is no doubt until 1989 there was a real threat to Australian personnel and assets based at Butterworth, nor that RCB was established and armed to react to that threat should it eventuate.
Yet successive Australian governments have consistently refused to recognise RCB service as warlike, and concede appropriate veteran benefits to those who served in that period.
The RCB veterans lobby group, have gathered a massive database of previously classified material which indubitably supports their claims for recognition.
They will not rest until they clear the fog of bureaucratic and political obfuscation which continues to deny their evidence.

Note a correction to the article: Robert Cross is the RCB’s veterans lobby group (RCB Review Group) leader of which Ted Chitham (past CO 8/9 RAR 1974-1976) is a member.

“RCB veterans have not surrendered nor will they…” Ross Eastgate