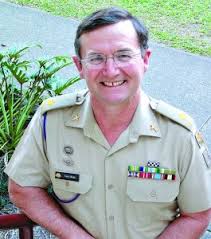 As a veteran of almost 48 yrs military service, the last 24 of which I served as a Chaplain , I must raise my grave concerns about the morality of the treatment of our veterans by ADF and Government officials in their continuing rejection of the substantive evidence being presented by the RCB Review Group in their case for recognition of warlike service.

In my 4 years of training at RMC Duntroon, I was grounded in the need in public service, for uncompromising integrity, and the reality that sometimes oversights and mistakes are made because of inadequate or insufficient information, and the need for these to be corrected. There are plenty of precedents of recognition being granted belatedly, and the previously Secret evidence now available in relation to RCB, should provide scope for this case to be considered anew.

But it is not.
As this case goes on, what seems clear is that advisors and public servants are deliberately ignoring evidence and giving bad advice and recommendations to senior ADF officers and Ministers.
Some might construe this as a cover up of earlier mistakes. Nevertheless, we are now at a point where litigation may be required to correct the injustices felt by the members who served at RCB.
At the very least, a group of more than 10,000 veterans is experiencing unnecessary stress and dismay at the unjust way in which they are being treated.
Australians rightly expect to be given a fair go and fair hearing, and these veterans will not stop in their pleading until justice is granted them.
They have now seen The Defence Committee Minutes of 11 Jan 1973, and other official documents confirming irrefutably that this was an operational deployment to protect RAAF personnel and assets at Air Base Butterworth when a war was being fought from this base against communist insurgents.

We did no training with the Malaysians. We were totally focussed on defence of the airbase, and reacting to any communist incursions.
But of course the veterans already knew this, from briefings on the Air Base and from being “Warned for Active Service” before they deployed. Many were Vietnam or Borneo Veterans who have given testimony that their service in Butterworth met the requirements that saw them given Active Service recognition in earlier conflicts.

Others like me, an Infantry Platoon Commander at Butterworth in 1974-75 went on to serve in other conflicts ( in my case 6 other operational theatres) and subsequently got recognition for warlike service for similar service as at Butterworth.

But this case should stand or fall on evidence, rather than subjective opinions and the full evidence now needs to be considered, and the mistakes of the past need to be corrected.

What was a simple nature of service claim has now become also a case for ethical conduct or misconduct, which will have wider ramifications for Government and officials than recognising the faithful service of some patriotic veterans.
I would hope that those desiring an ethical consideration of this case will now act appropriately .
Yours Sincerely