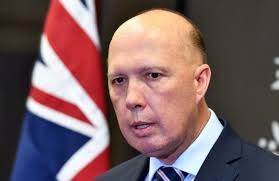 Full marks to new minister Peter Dutton for making a start on telling the truth about Australia’s defence mess by highlighting that the nation has had far too many defence ministers over the last two decades.

In all there have been 11. Most were inexperienced and relied far too much on the defence hierarchy.

But now Dutton, the 2021 defence minister, has confessed this Coalition-ALP political weakness, it’s worth reminding everyone of a closely-linked problem – we also have a defence hierarchy weakness, particularly in equipment purchases. The inexperienced ministers have found themselves covering up the defence hierarchy’s mistakes, often not realising that’s what they were doing.

The defence ministerial weakness was created because it was not a highly-prized portfolio. The hierarchy weakness was partly created when in 1999 the then defence minister John Moore sacked two of Australia’s top public servants, secretary of defence Paul Barratt and his defence equipment chief Gary Jones over a dispute involving the Collins class submarine. Moore could never have envisaged that the superb defence team that Barratt built up would then be scattered, leading to the mistakes we now face. Many of the newcomers who made equipment decisions had good battle experience but not were not project engineers and did not have the skills for the task. And once they made a decision they would never retreat.

Some of their mistakes blew up in the face of the previous defence minister, Linda Reynolds.

For example in the cover up the JSF-F/35 aircraft shortcomings she said the aircraft was on time and on budget when it was about 10 years late and five times over the original cost estimate.

Perhaps the most important task of Peter Dutton is to get outside help to review the modelling that the Defence Department undertook to compare the performance of the JSF-F/35 aircraft with the top Chinese and Russian aircraft.

When Australia’s top defence analysts Air Power Australia did a similar study they discovered that in combat the JSF-F/35 is no match for the top Chinese and Russian aircraft.

The defence people have given their findings a top secret classification. If, as is likely, they have confirmed the Air Power modelling then Peter Dutton in the national interest must abandon his predecessors’ role of covering up mistakes. Rather he will require outside help to prepare a JSF catch-up strategy to negotiate with the Americans.

And history tells us that it’s incredibly dangerous for a nation like Australia to be talking about war in the next five years and not having the required air power.

Australians do not fully understand the JSF/F35 shortcomings but they do understand that we are in a terrible pickle in the submarine contract.

And again the previous defence minister was caught out covering up the mess. Linda Reynolds told the parliament that the original French tender estimate was $50 billion in 2016 dollars. At the time of the 2016 announcement the press were told that the 2016 base tender estimate was around $22 billion in 2016 dollars—about half the minister’s figure. Thanks to Senator Rex Patrick the freedom of information regulators are prepared to allow the around $22 billion figure to be released. But defence chiefs are fighting to stop the release which would reveal how the cost has escalated.

The French had no problems with the around $22 billion figure being revealed in 2016 but the current defence chiefs have roped the French into supporting them. It’s all about preventing the truth and the cost rises becoming known. And when you’re trying to negotiate with the French to get a better deal, enlisting them in stupid concealment games to protect a ministerial mistake is just bizarre.

It would seem that Peter Dutton has woken up that the failings at the top of defence are affecting morale among the troops and so he’s addressing the troops directly. Thank goodness.

And Dutton would also have been horrified to discover that while we intended to buy a fully operational frigate we’ve ended up designing a new one because the British frigate that we purchased couldn’t take our radar and the American combat system. Its another high-risk, high-cost and delayed project.

Meanwhile the world is moving on with new weapons system developments including the use of drones to pick out and trigger destruction of “surface equipment” like frigates, and lead acid battery submarines that must surface to recharge.

We have drones but not those at the advanced technology level.

The nation must hope that we now have a defence minister who is prepared to discover that his inexperienced predecessors on both sides of politics have made mistakes and to begin the process of rectifying those mistakes.

The way China has treated Australia in trade issues has evaporated much of the goodwill Australians had towards Chinese. And so it makes good politics to make anti-China speeches. But when your opponent has superior equipment it is very dangerous to go on provoking campaigns even though you might have right on your side. Of course we have the Americans supporting us and they will be required to do the heavy lifting in any military conflict. But the US concentration on the Middle East in recent years has reduced their capacity to stay ahead.

One of the reasons China treats Australia with contempt is that, with some justification, it thinks we have been simply stupid in defence equipment matters. Accordingly it no longer has respect for us.

The full extent of the bungles is not understood by the Australian public and Peter Dutton has a difficult task because many of the mistakes were made on the Coalition watch.