Why does the latest Ministerial rejection leave out, for the first time ever, reference to training a deception towhich successive script writers have clung to as the main point upon which to reject the RCB claim of being on warlike service as is proven by the evidence now available?

The response to Sen Burston signed by the then Minister for Defence Personnel on the 20th November did not necessitate a comment in relation to the specific roles and responsibilities of Rifle Company Butterworth.

This response beggars belief. Every rejection of claim and justification of ‘ peacetime service’ to date has included the Defence assertion that RCB was there primarily to train.
Now, with a comprehensive fresh submission that again comprehensively proved that assertion wrong, Defence still make this avoidance statement.
How can the claim be made that there was no need for the Minister to refer to training in this latest denial? It is one of their evidence ‘denial pillars’.

It’s called selective avoidance to screen out contradictory evidence. – Sir Humphrey Appleby would be proud of  the author who wrote this answer for the Defence Minister. 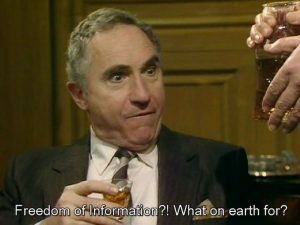